The Bend in the Road - Lenny Burke's Farm

The Tale of a Life, Forever Altered By TBI

Emmie Burke and her children, Lenny, Kevin, Michael and Kathy, and I started talking about a book about Lenny Burke and Lenny Burke’s Farm years ago, the idea being that this story of one almost unimaginable trauma and a family’s response is the kind of story we need now, perhaps more than ever, a story of unselfishness and perseverance, a singular story that has brought healing, real healing, directly to hundreds and, indirectly, to countless others.

Nearly everyone who was living in our part of Vermont in 1979 has heard the story of the promising young man undercut by an opponent in a high school basketball game, the resulting coma as he lay near death, the seemingly miraculous recovery. Others closer to the event had followed the parents’ and siblings’ anguish, the dedication of friends and teachers who lived for weeks outside the intensive care unit, hanging on every piece of information. Still others knew of a mother’s creativity and inventiveness, using smelly sneakers and pizza to communicate with a son who only appeared silent to those who weren’t listening with more than their ears, and then the journey to share what was learned with others.

Lenny Burke’s injury, an injustice that might cause one to question not just his or her faith but the very meaning of what it is to be alive, was a pebble that weighed an immeasurable quantity; the pool it was propelled into is, also, immeasurable, the ripples of such significance that there’s no way of knowing how many lives have been affected by what one child, one family and one community learned, not just about tenacity and inventiveness, but what scientists, therapists, mental health practitioners, parents and survivors have also learned about that remarkable part of our body we call the brain.

As I, too, entered the journey with the Burke family, following that bend in the road, it became clear that Lenny’s injury, like the proverbial pebble in the pool, generated an ever-widening circle of questions about the brain: How is it that this organ that weighs roughly 3.3 pounds can do so much or, more precisely, how do those billions of neurons in our brain – roughly 86 billion! – communicate with one another and with the rest of the body? How, if the frontal lobes of the brain control most executive functions such as self-control, planning, reasoning and abstract thought, can people who have suffered disastrous damage to this area of the brain relearn these skills? What is going on in the brain when a person is in a coma and how much of what they recall from that time is real? And what of that phenomenon we call a near-death experience?

I have spent much of the past year hanging out at Lenny Burke’s Farm, Emma’s Place and its satellite residences, pondering these questions in the company of people with a host of what are called disabilities. Some can’t walk. Others have difficulty talking. Still others can’t remember what they had for breakfast. Others, who themselves sustained traumatic injuries to their brains, are caring for people still in recovery.

I have no words to express what a joy it has been, what pleasure I’ve had watching Vanessa compose a pithy diatribe on her Dynavox or when Danny flashes the peace sign and graces me with his positive benediction; to hear Meredith talk about stem-cell research and Geep sing the 20 or so verses of “American Pie” while the aroma of whatever delicious dinner Linda has made fills the air. All the while, Christopher Patrick Russell – I love to say his full name because it always makes him smile – beams his beatific grin, hand raised and fingers spread in the Mork from Ork salute.

Just this summer, Buddy, a man whose brain was said to have almost died from lack of oxygen, began to speak more words and walk with more confidence; he’s smiling a lot and seems less afraid. Some days he looks downright happy. Jason is chopping wood and finishing a carving of a cat and kittens with his wood-burning tool. Paul is selling tomatoes and zucchini he grew for spending money; Louise is riding the bus to bingo at the senior center; David has seen the tree planted over Lizzie’s grave flower. Some of the clients have become grandparents; two are in love; one is moving closer to home.

Every book is a journey. You begin with an idea, an inclination to explore something interesting and important, to tell a story, a tale worth telling, and then set forth. I write nonfiction so, unlike my novelist friends, I talk a lot about what I’m working on, inviting friends and colleagues into the adventure, seeking their company and reflections on the odyssey. Over the decades, it’s been universally true that these conversations will open up new ways of looking at my subject, lead me along an unexplored itinerary, reveal the oversights in my assumptions, and teach me new ways of understanding what I thought I’d fully explored.

Serendipity comes in many forms; you just have to keep a lookout for the ways in which it will enrich your work and, in so doing, your life. Nearly everyone I’ve spoken to about this book knows someone who has sustained a traumatic brain injury, or they have had one themselves. It’s the way we live our lives: cars, sports, war, assault, stupidity, birth defects and aging blood vessels, simply being in the wrong place at the wrong time, or the right place at the right time.

So, yes, this is Lenny Burke’s story, but also yours.

Excerpt: The Power of Song

The song, “American Pie” has so many complicated stanzas that it takes up three pages in the songbook that clients and staff use during Thursday group meetings at Lenny Burke’s Farm. A few groans rise up when one of the clients requests it, mostly from the staff. The clients are up for the challenge. Gary Miller-Wade, who leads the Thursday group sessions and sing-along and also works as a one-on-one aide to one of the clients, quickly quips, “We do all the requests here at WADE radio.”

And before long, everyone is singing, “Do you believe in rock ‘n’ roll? Can music save your mortal soul?”

It’s almost unbelievable to watch clients who can only say a few words – fellows like George Parton, aka “Geep,” whose vocabulary usually includes only yes, good, thank you, and aiii, aiii, aiii, which means something is making him unhappy – singing stanza after stanza of this and some 20 other songs on a given afternoon.

Everyone has a favorite. “Cotton Fields” for Meredith Coffey; “Country Roads” for John McDuff; “You’re Time is Gonna’ Come” for Jason O’Connor. There’s joy in the room as the words spill forth, old favorites like “King of the Road” for Daniel Patrick Fanning, for whom they also always sing, “Danny Boy,” and “Will the Circle Be Unbroken” for the Rev. Richard Marceau, the man the clients who knew him never forget. In a beautiful way, Rev is there in each Thursday’s sing-along.

Miller-Wade is on guitar, making the rounds, stopping in front of Erich “Buddy” McLellan to sing directly to him, leaning in close and pausing while McLellan, his voice barely audible, sings the next verse. It’s a big step; just months ago, McLellan wasn’t speaking at all.

“What do you want to sing next?” Miller-Wade, a lifelong musician who plays in several popular Grateful Dead cover bands, asks.

“Stewball!” the clients shout out, as Miller-Wade hands the guitar over to Kathy Chandler, who runs Emma’s Place. This is her song and the clients love its simplicity and familiarity. It’s a moment to behold, clients and staff grinning as the words about a horse who is the underdog in a race but wins in the end.

The use of music in therapy for the brain has evolved rapidly in recent years as brain-imaging techniques have revealed the brain’s plasticity—its ability to change—and have identified networks that music activates. Knowing this, doctors, researchers and therapists have increasingly used music to retrain the injured brain – just as Dr. William Frey did with Lenny Burke back in the early 1980s. Long before it became acceptable practice, Frey was using the popular Credence Clearwater Revival song “Proud Mary” to help Lenny remember basketball statistics and, in so doing, rebuild brain synapses.

How is it that people who have lost their ability to talk can sing and that song can stimulate improvements in motor control? The answers are complex and still being studied but researchers now know that singing, which relies mainly on right-hemisphere brain systems, can bypass injured left-hemisphere speech centers. More simply, singing comes from a different part of our brains than spoken language. It’s as if singing opens a kind of back door to an undamaged part of the brain, a part that can be trained in some cases to take over the part that used to control speech. Indeed, Arizona Representative Gabrielle Giffords, who survived a gunshot wound to the left hemisphere of her brain, has used music therapy as a way of regaining her voice and ability to communicate.

Also, music tends to activate the brain bilaterally – both sides of the brain are engaged – and, while the evidence indicates that it’s more of a right brain activity, it’s also thought that music may create and activate neural responses throughout the brain and enhance the way the whole brain works. For example, researchers discovered that learning word lists in a song rather than just saying them activates temporal and frontal brain areas on both sides of the brain, while spoken-word learning activates areas only located in the brain’s left hemisphere.

This research has been used in early child education from recordings like “School House Rock” or television shows like Sesame Street. Applying this knowledge to people with learning problems based on damage to a part of the brain only makes sense.

Researchers have also discovered recently that music activates what’s called the “attention network” on both sides of the brain, meaning that music can be used to help people with strokes or brain injuries overcome attention problems. The implications of this for people with attention deficit disorder and similar conditions are exciting.

Now researchers are investigating whether music can also be used to reteach motor control to people with a host of conditions from traumatic brain injury to Parkinson’s Disease. The reason lies within the brain itself, where music and motor control share circuits. Indeed, biomedical researchers have found that music is in itself a highly structured auditory language involving complex perception, cognition, and motor control in the brain, and thus it can effectively be used to retrain and reeducate the injured brain for a whole range of yet still unexplored recoveries.

And, so, at Lenny Burke’s Farm, they sing. They sing with joy and hope.

(A portion of the cost funds The Lenny Burke Farm.) 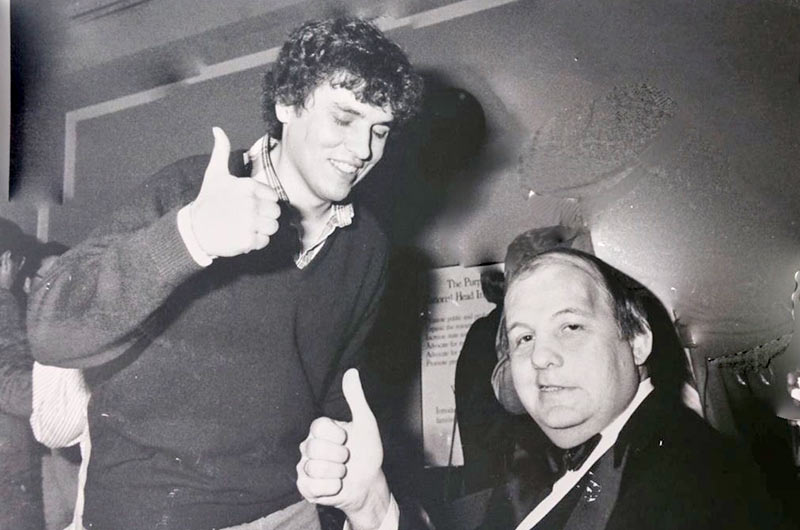