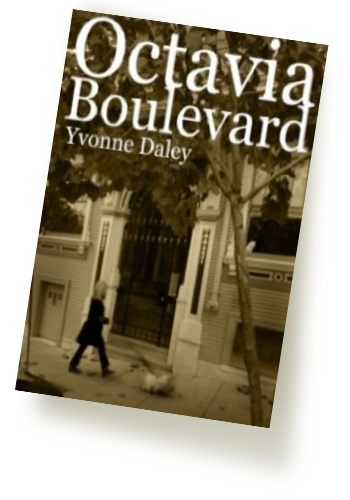 A Microcosm View of a Little Apartment in San Francisco

Octavia Boulevard is a San Francisco neighborhood long overshadowed by an ugly double-decker freeway damaged in 1989 in the Loma Prieta earthquake. I moved there shortly before that expressway was replaced by a Parisian-style boulevard, the first road of its kind built in America in forty years.

In many ways, Octavia Boulevard is a microcosm of San Francisco, a showplace of the city’s ingenuity — the boulevard has kaleidoscopes on the corners for pedestrians’ entertainment, for just one example. But Octavia Boulevard also exemplifies the city’s failure to use its wealth and creativity to solve ingrained social problems, to help the disenfranchised and unfortunate. Day after day, I wondered how San Francisco had money for such frivolities while homeless men slept outside my door, in the alcoves of the Baptist Church around the corner, and along the reconstructed boulevard.

My book, Octavia Boulevard, tells the stories of these homeless men and also the story of life of the building I lived in during the neighborhood’s transformation, covered with fusty gray paint and overlooking the ruins of the freeway when I moved in, and the friendships – family, really – forged over the next few years among its residents — people like Mae West, an 80-something blind woman who worshipped at the African American Hebrew Cultural Center and shared her faith in the future with me; Noel, an aged Guatemalan who knew the city’s raucous past and loved to tell stories about it; Ann and Alexandra, the baby she adopted from Vietnam, the building’s only child; Robin, an iconic San Franciscan who once owned one of the city’s hottest nightclubs and was perpetually planning his resurrection; and Jul, our landlord, a complex fellow who could be our hero one day and our nemesis the next.

Octavia Boulevard also celebrates San Francisco — its wonderful food, weather, culture and traditions — but most of all its people, characters like the Sisters of Perpetual Indulgence who spoof the Catholic church while raising thousands for nonprofit charities; artists like Lief, creating beauty from driftwood, clay and cloth, and the quirky misfits with whom I shared my morning coffee at the Laguna Sidewalk Café.

Progress happens. In San Francisco, progress is king, inevitable as weather. Yet, as with so many human endeavors, progress brings unintended consequences. Some people prosper. Others suffer. Octavia Boulevard tells a small part of that story. In short, an allegory of life in America’s most self-indulgent yet perpetually fascinating city.

An Excerpt  from Octavia Boulevard

2003-2004
No, said the Hobo, No more tales of time
Don’t ask me now to wash away the grime
I can’t come in ‘cause it’s too high a climb
And he walked away from my fleeting house. 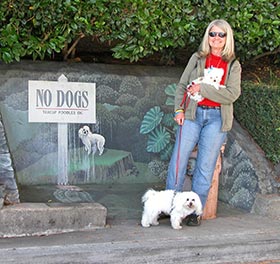 I’d wasted a week looking at potential apartments and eliminating them. Too expensive, too dirty, too small, too lecherous a landlord, with several falling into more than one category, such as that last offering, advertised as having a “quintessential San Francisco view,” which it did when you sat on the toilet. Otherwise, its “turn of the century” amenities included a narrow, three-story staircase, an antediluvian kitchen and no closets. A steal at $1950 a month. Still, thirty-three potential tenants applied in the time it took me to get in and out.

The last place on my list held promise. It was located just off Market Street, San Francisco’s real main street, and within walking distance of the Castro, the Mission, Haight-Ashbury, Hayes Valley and the Civic Center, some of the city’s most entertaining neighborhoods. It was also close to public transportation, a plus as I sure couldn’t afford to live in San Francisco and own a car. I was early for my appointment, and hungry, so when I spied a little Italian place on Castro Street I decided to pass the time over coffee and a sandwich. As I was maneuvering through tables filled with tattooed young men in muscle-shirts and real estate agents in Wilkes-Bashford suits murmuring about body waxes and Bukowski’s poems over their lattes and lunch-hour merlots, a woman reached out a hand.

“Did you know her?” she asked, pointing to the Angela Davis for Vice President button attached to the strap of my backpack. The woman was middle-aged with earnest brown eyes and long white hair, hanging like silken drapes on either side of her face, a fashion reminiscent of the Sixties. Back then, white girls had the drapes; black girls had the Afro. I wanted a ‘fro, but my hair, it couldn’t do it. Angela Davis, now, she had an important Afro. I didn’t say any of that, of course, standing there with tray in hand, but rather mumbled something about finding the old campaign pin in my closet when I was packing for San Francisco. Then I offered the sentence that caused the rest of this tale to happen, “Maybe it reminded me of the time when people did something with their beliefs.”

“What do you do with your beliefs?” she asked without hesitation.

Before I had to actually respond, the woman’s husband emerged from the men’s room and she pointed out my pin to him. The man was gray of hair and pale of skin, tall with rough hands and long, muscular arms encased in a well-worn T-shirt, giving the impression he might work as a day laborer. He quickly pulled their table next to mine and took over the conversation, launching into a rambling soliloquy about Angela Davis as if he’d written a thesis about her between jobs and had been awaiting the opportunity to present his theories on her significance.

It was delightfully odd. One moment I was thinking how ridiculously expensive living in San Francisco was going to be and the next I was chatting it up with perfect strangers and the subject of our discussion was Angela Davis, a well-known commodity as a radical member of the Black Panthers back in the day but someone I hadn’t thought much about until her campaign pin appeared in the back of the closet of my Vermont home. I’d just chuckled when I found it there and without much thought pinned it onto the backpack I’d also unearthed from the closet’s depths. 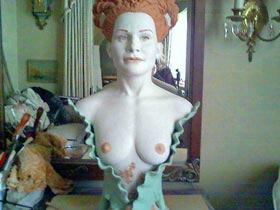 In the years since I had bought/found/been given the pin – I had no recall whatsoever – Angela Davis had pretty much disappeared from the common lexicon. Not from the mental glossary of the man at the next table, however.

“Did you know Angela Davis was the daughter of an auto mechanic and school teacher from Birmingham?” he asked, focusing metal blue eyes on me. He spoke quite formally and with a particular inflection, pausing often to chew his food. “Angela Davis represents the American dream – living as a political and social radical, listed on the FBI’s most wanted list, winning her freedom …” Long pause. Chewing and more chewing on his grilled eggplant on focaccia before resuming, “… running as the Communist party’s candidate for vice president and getting an honorary degree from Moscow University. And now …”

“Now I think she works as a college professor or at least she did last I checked.”

The man’s Adam’s apple yo-yoed for a couple of seconds before he finished the thought. “A radical, of course, no one I would support but living proof the American Dream is alive and well.”

“Alive and well? You must be dreaming,“ I snorted. Then, regretting my ill manners, added, “I don’t know how she sees it but wasn’t Angela Davis one of the few of those Panthers to get out alive? What were their demands? Land, Bread, Housing, Education, Clothing, Justice, Peace – the American dream, right?”

He roughed the hair on his upper arms, swallowed deeply while I waited for him to finish his thought. “At least not here in San Francisco. Here, you’re better off to be a member of some minority or a woman, better yet gay or lesbian and black.”

I’d like to believe the man was right, that anyone could make it on the power of hard work and determination, the old Horatio Alger idea, regardless of race or gender. However, I had concluded long before that success in life – not material success but rather satisfaction or at least a sense of accomplishment – required talent and determination and hard work, for sure, but also luck and circumstance and so many other factors both within and outside each person’s control that success was pretty much a crap shoot. I wanted to argue for the downtrodden, the unlucky, the disenfranchised, screwed from the start due to the color of their skin, place of birth or gender identification, screwed despite talent and determination.

I was tempted to introduce myself, to point out that Angela Davis’s middle name was my first name, Yvonne, and that she had taught at San Francisco State University where I was now a professor, which was why I’d been delighted to find her campaign pin, and to ask where his interest came from. But I needed to get to my appointment so I simply laughed and let him have the final word.

Still, as I stepped into the sunlight of San Francisco’s Castro District, a place where people had permanently altered society’s rules, I had to laugh. I sure wouldn’t have had a conversation like that with an absolute stranger in Rutland, Vermont. Yes, Rutland. That was the unfortunate name of the Vermont city I had just left and would return to during the months between semesters. I was about to begin the latest chapter in the bi-coastal life that I’d forged a few years previously after working as a journalist in Vermont for twenty years and raising my kids there.

Rutland, Vermont, and San Francisco, California. Quite a contrast I thought as I trudged down Market Street and turned up Octavia toward the apartment for rent.

Links Related to This Book