Vermont Writers A State of Mind 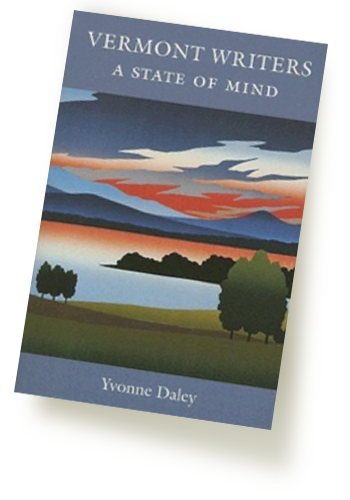 VERMONT IS A STATE OF MIND — a place that breeds rugged individuals, quirky politicians, hard workers, stubborn idealists, unconventional economists and gifted artists, including many of the most popular and important writers of our time. Indeed, as novelist, poet and essayist Jay Parini of Middlebury says, “Vermont is the main place for writers of all sorts. We have the mother lode.”

Why is this so when Vermont is relatively distant, both geographically and metaphysically, from the centers of publishing as well as from the issues that confront contemporary Americans – overcrowding, pollution, rampant crime, to name a few — issues that are often at the heart of current literature? It’s not that Vermont and Vermonters are immune to societal, economic and moral dilemmas. Like residents of most rural states that have experienced declines in both agricultural income and factory jobs, many Vermonters, including several of the writers profiled in this book, struggle to make a living or do so by working several jobs at once. The recent influx of hard drugs into our towns and cities has brought home the harsh realties of contemporary life. And the friction between development and environmental protection makes front-page news on an almost daily basis. In some areas, such as gay rights and environmental protection, Vermont seems to be on the forefront of change and our writers have proclaimed that position to the nation. But our dark side has also been widely publicized. We’ve made the news too often with vicious slayings among our own and the threat of terrorists invading our borders. Nonetheless, because Vermont is a small state where we still have the ability to know our neighbors with just a bit of effort, the scope of human travail seems more manageable here. Maybe that is why Vermont is viewed as a safe haven for writers: we can manage the commerce of daily life more easily here.

Or escape from it.

Despite its small population, 612,000 in the 2001 census, Vermont has always drawn a disproportionate number of writers (and artists in general) to live within its borders. Charles Edward Crane wrote in his collection of Vermont stories, data and history Let Me Show You Vermont, first published in 1942, “The risk Vermont parents run of having a poet or other would-be writer born into the family appears to be about one in a thousand, which is considerably higher than the risk of having twins.”

While that may be true, most of the talented writers you’ll meet within the pages of this book are not Vermont natives. They have chosen the state as their home. The reasons why have much to do with elusive concepts that set Vermont apart from other places. This book, in part, attempts to explore the varied and sometimes conflicting reasons why writers have chosen to live and work here throughout the state’s history.

A recognition of place is at the heart of this inquiry. “Whenever I go to Vermont I feel that I am traveling toward my own place,” writer and teacher Bernard DeVoto, a faculty member at the Bread Loaf Writers Conference in its early years, wrote in the December, 1951 Harpers’ Magazine. “You do not have to be a Vermonter to experience this sense of returning home. The home that Vermont represents may be a dream of rural life. It may be a picture of a white church presiding over the elms on a village green. It may be the smell of wood smoke in a farmhouse kitchen or the patches of bluets like mirages of recent snows on rocky pastures in May. But there are few of us, no matter where we were born, who haven’t felt this tingle of recognition, and the Vermonter away from Vermont is an exile indeed.”

That sentiment is both his and ours; there is something about the place that speaks to today’s residents as deeply as it did to our predecessors. That something is in part the natural world, of course, the cycle of the seasons and the rich and varied environments that comprise Vermont, weather that both soothes and challenges us, and a natural beauty to which our native soul responds. And, perhaps because artists are apt to pay more attention to those inner responses than people who have to attend to more measured urgings, for them the attraction to beautiful places remains strongest. Thus, quite simply, some writers are drawn to live and work in Vermont by the innate beauty of the land and Vermont’s pastoral environment.

The allure also lies in the strength of Vermont’s small communities, which offer a support system often absent in more urban centers, a way of dealing together with the overwhelming problems of our lives and times. Beyond that, Vermont is attractive to writers, particularly beginning ones or those whose work has not yet provided economic stability, because one can live simply here, without the pressures to over-achieve and over-consume. While self-sufficiency is a hard and arduous lifestyle choice, some writers — poet and David Budbill comes to mind, as does essayist Noel Perrin of Thetford — have achieved a modicum of financial independence by cutting their own wood, growing their own vegetables and otherwise reducing expenses. Of course, these activities take time from writing. Still, it’s a lot easier to raise a few chickens in a Vermont backyard than a Manhattan apartment and, as novelist Jeffrey Lent, a Vermont native who returned here to live after his first novel was accepted for publication, can attest, few activities provide a better balance to the sedentary work of a writer than those of the barn and the pasture.

Yet, there is something more about Vermont’s magnetism that appeals to those with a sensitivity for place. Fifty years ago, essayist Margarite Hurrey Wolf wrote that, as she traveled back to Vermont, passing valleys hemmed in by mountains and an occasional group of children or cows meandering through the fields, she was filled by a “melancholy yet pleasing joy in my bosom which surpasses all the pleasure that it is in the power of riches or splendor to bestow.”

Few have captured better that sense of belonging that attracts Vermont writers and is often celebrated in their work.

For some of our resident writers, the path here has been long and circuitous; for others, it was swift. Still others found themselves here as a matter of happenstance — and stayed. Each writer portrayed in this book tells the story of how he or she ended up in Vermont, by design or not, and each reflects upon the state’s impact on his or her life and work.

Perhaps more than any other profession, writing is a fulltime job. Writers are working when they shop at the grocery store, canoe a river, sleep in bed, pay their bills and take a shower. Ideas, characters, settings, lines of poetry and complex plots can come to us at any time; indeed, it’s often when we’re not trying to write that the best material presents itself. The hard part, the work, of course, is getting the image, the idea, the character, the environment, the story or poem itself from the brain to the page in a manner that will engage the reader. In this book, 18 authors share their writing approaches and techniques; they open up their toolboxes and show us their instruments, their tricks of the trade. And because the first rule of good writing is “Show, don’t tell,” I show you how each writer puts his or her tool to work by offering an excerpt from his or her body of written work, chosen to demonstrate the author’s skill and subject matter.

Thus, the reader can expect to learn much about each of the writers profiled in this book and his or her relationship to Vermont while also gleaning from each a little insight into that marvelous process we call writing — both the craft of it and the magic. Writing is not easy work. It requires diligence and attention to all sorts of detail. But it is one of life’s most rewarding pursuits. I hope that this book will inspire writers at all stages of development to put pen to paper or fingers to keyboard, to find their own words and express their own stories in poem and story, in memoir, profile and essay. To that end, each chapter ends with suggestions for reflection and writing exercises. Students of writing will discover that these “assignments” often result in pleasantly surprising outcomes. I urge those of you who are working in a particular genre — poetry, for example, or short story – as well as those of you who are exploring the craft of writing for the first time to try as many of the exercises as you can. Experiment. Try something unfamiliar. You’re likely to be happy with the results.

Most important, I hope this book will provide entry into the treasure trove that is the work of a select group of gifted Vermont writers while also strengthening and sustaining that rich literary tradition that this book seeks to explain and celebrate, the tradition of writing in Vermont. It’s a tradition too many of us take for granted, and one we should not.